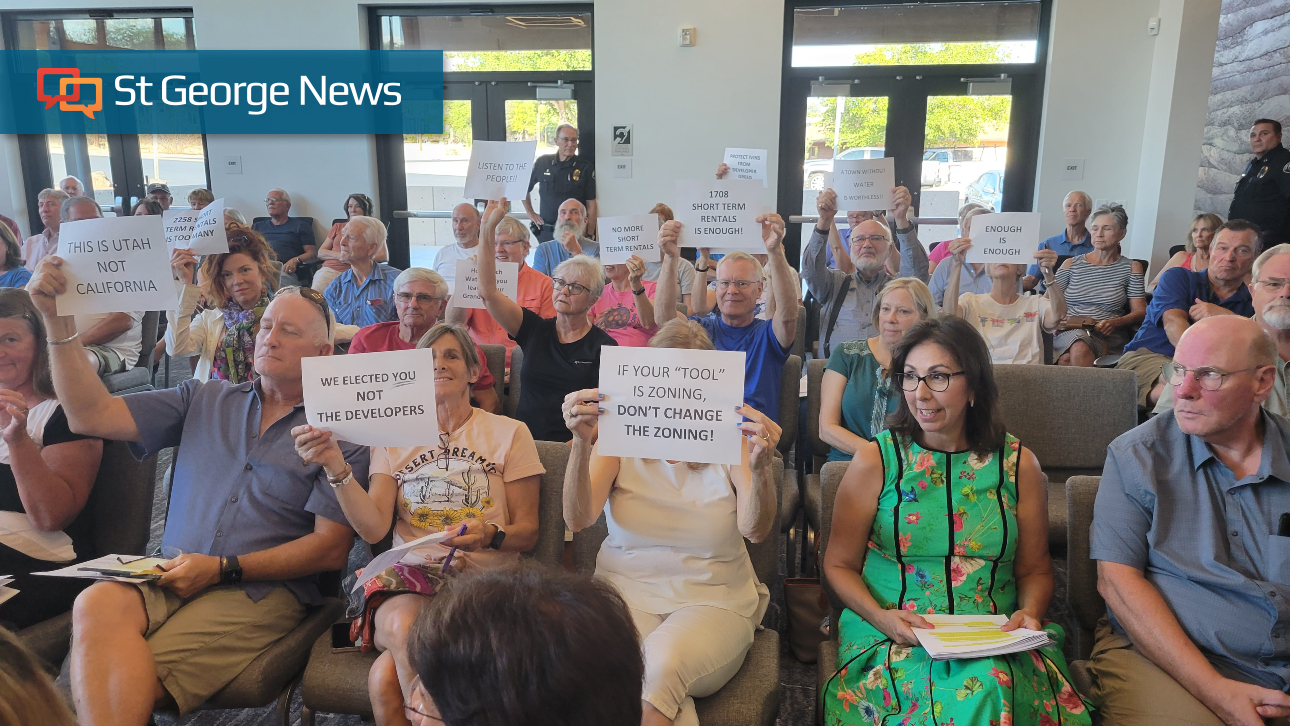 IVINS — A group of Ivins residents are suing their town over a September decision by Ivins Town Council to redesignate 113 acres in south-east Ivins for a commercial residential resort, which is said to include short-term rentals.

Calling themselves the Defenders of Greater Ivins, the group of about 200 Ivins residents are looking for a judge to overthrow them the 3-2 vote that took place at the September 1st Ivins City Council meeting. The decision resulted in the transition of the “SITLA 120” lot at the corner of Puerto Drive and 400 South from purely low-density residential to a mix of residential, commercial and recreational areas.

The land is owned by the Utah School and Institutional Trust Lands Administration (SITLA) and is being developed by Rize Capital, which has announced it will use the land for a development called The Retreat. A feature of the retreat, which will include townhouses, single-family homes and a commercial element, is what the developer called a horizontal hotel made up of short-term rental apartments.

Many of those in the Greater Zion Defenders group, also known by its acronym DOGI, pronounced “doggy,” spoke during public comment at the September 1 meeting. At the hearing, every seat in the room was full, even after additional seats were added, and the line to speak at the podium stretched to the back of the room. Of the 13 residents who spoke out, one spoke out in favor of the rezoning.

Attorney Justin Heideman, representing DOGI, said while the group’s main effort is to oppose the project altogether, the thrust of the case in court was to allege that the council failed to follow proper procedure.

“The reason is that the City of Ivins broke their own code,” Heideman said.

The procedure in question is within the Ivins City Code Section 2.06.401, covering the re-examination of an item on a Council’s agenda. Heideman said the same application had been reviewed twice, which violates that section of the city ordinance.

“The same person who made that second motion made the same motion a second time during the same session,” Heideman said. “No new evidence was presented that could not have been presented at the meeting. There was nothing illegal, arbitrary or arbitrary about the way the vote was conducted. And you can’t. So they violated their own ordinances in four different ways.”

During the September 1 meeting, there were three motions regarding the rezoning of the property. The first, by Councilor Mike Scott, called for the rezoning to be opposed. This vote failed with 2:3.

The second, by Councilor Adel Murphy, was to approve the rededication. That vote also fell 2-3 after Councilor Jenny Johnson changed her vote, saying she wanted “more clarity” about adding conditions to the rezoning.

After further appeals in support of the rezoning by Rize attorney Matt Ence, who also serves as Santa Clara City attorney, and SITLA representative Gregg McArthur, who is also a St. George councilman, Murphy filed a third motion, which The second application for approval of the rededication was accepted verbatim.

Dale Coulam, who serves as both city attorney and city manager for Ivins, was asked by St. George News if he had any concerns that the process for submitting city action requests was not being properly followed.

“No, not on my part, but we currently have a defense attorney looking into the matter and we’ll just see how it goes,” Coulam said.

That attorney is Bryan Pattison, who told St. George News his general policy is not to comment on litigation, adding that he was recently hired and is becoming familiar with the case.

“It’s not often that zoning requests are made,” Pattison said. “Usually the city has a lot of discretion.”

Besides DOGI and Ivins, there is a third party that wants to play a role in the case: the developer.

Rize, acting under the name of EWD, LLC, has filed a motion to intervene to become a party to the court proceeding. Such an application is used when a party not involved in a case wishes to become one.

Heideman said he found Rize’s attempt to become a party in the case unusual and was the developer trying to get between the city and its citizens.

“What usually happens is you have a civic group like ours and they see the city doing something like this and they petition the judge for a review and ask the judge to determine if what the city did was inappropriate or not,” he told Heideman, who added he denied the motion. “What happened here is that (the developer) filed a request for intervention and the reason they did that is because they want to oppose my customers’ request. So essentially, they want to be on the other side of the appeal, and that’s not usually allowed.”

Jerry Miyahara, Rize Capital’s chief operating officer, did not respond to a request for comment.

The motion to add the developer as a party to the case will be decided during the first hearing of the case in the courtroom of Judge Keith Barnes of the 5th Circuit Court on December 6th.

Regarding the city of Ivins, Pattison said the city took no position. However, he said Ivins “doesn’t mind the developer defending their interest.”

Chris Reed is an editor and reporter for St. George News. He has steadily moved east after growing up among the Valley Girls in the San Fernando Valley of Southern California. He graduated from Cal State Northridge before spending a decade in Las Vegas. As a sports reporter and editor, he once compared shoe sizes to Shaq. As a news reporter and editor, he has covered parades, triumphs and tragedies. He also once came close to the stars while promoting a room module builder. He came to St. George for love and has learned to love the community. He is the proud father of two boys, his youngest a champion against both autism and type 1 diabetes.