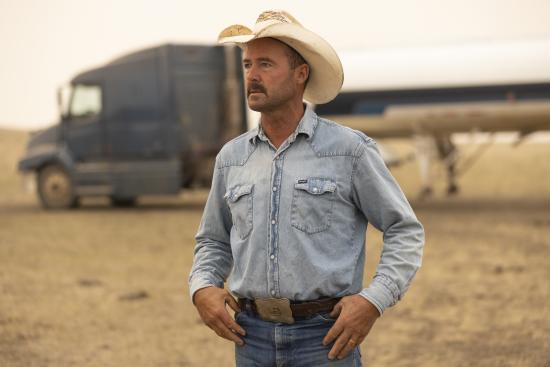 Robert Boylan leaned his lanky frame against a fence on a windy day at his ranch in Butte County, South Dakota.

Cattle and sheep run here, a pairing that is an integral part of Boylan’s diversification plan.

“Honestly, I think I raise cattle so I can wear a cowboy hat,” he says, a huge grin spreading across his face. “I keep sheep to make the payments. Sheep make better use of what nature has given us out here than cattle. Sheep tend to a lot of weeds, especially early in the season, and don’t touch the grass early either.”

Wool prices have been good for Boylan in recent years and the lamb price has been surprisingly high this year.

Boylan discusses his ranching history and the struggles of ranching in modern times.

“I don’t know of any unpaid ranches that could do it without diversification,” he explains. “You either need a spouse who works in town and has insurance, or we’ve opened a little bike rally bar that gets busy before, during and for a while after the Sturgis Motorcycle Rally just up the road is.”

The bar helps pay for a few months’ groceries, and the Boylans have also branched out by building a wedding venue on-site.

“As a promise, I built my daughter a wedding barn. And it really blossomed. This year we had 13 weddings. We’d love to do a little dude ranch too, but I just don’t know if we have the time,” he says.

Boylan’s sheep on the prairie in late May in harmony with nature. In early July he docks his lambs’ tails and then they go on the rotary grazing program.

Calving does not start until around April 20 for the same reason.

“We’re trying to work with nature and sell a little less pounds per calf, but we’re selling a lot more pounds for live calves,” he grins, in contrast to the formerly usual loss of some calves in late-season winter storms . “I think those two ideas and selling my hay equipment are probably the two best things I’ve ever done for this ranch.”

As he drives across a large pasture along a wire and picket fence, he talks about the availability of water and what it means for his farm.

“The water situation on this ranch was terrible when I took it,” he recalls. “We’ve added a lot of land since we signed the first contract, but we’ve probably laid almost 60 miles of pipeline. The original project was done under an EQIP program and they are still helping me with some ECP money this year.”

While Robert built most of the reservoirs himself, a number of agencies have helped with the 120 reservoirs over the past four years. He has around 80 water tanks on site.

“Water distribution is the best thing you can do for grasslands,” he says. “If you’re keeping large numbers of animals, you need to have water distribution to prevent them from ripping up the ground in small areas.”

Too many cows running to the same water source over time will result in deep tracks and erosion.

Boylan estimates that it will take another 3-4 years to complete the required water distribution. He does the work himself and because he owns a trencher, he gets hired for others too. It’s another income boost for the ranch.

Coming to a creek, he points to young trees sprouting on the banks where it used to be trampled and uneven ground.

Here he is working on river bank erosion control with interlocking rock, a limestone product. In addition, there are pine and poplar structures that help dam the water and hold the silt. In the end, it should force the stream to become more of an “S” shape with a gradual sink.

“We all have to work to take care of the land,” he says, referring to the project.

“Robert has worked diligently to improve his ranch for years and NRCS has been a partner to make improvements and expand infrastructure and his pasture management,” he says.

“When your soil is doing well, the wildlife is doing well, and your livestock are doing well, too,” he says. “I have tried to conserve some areas of this entire creek area to stop creek and bank erosion. As a result, hundreds of poplars sprout on the riverbank. Getting some trees to grow on Willow Creek is a big priority for me. I’m very proud of that.”

Aside from installing water distribution and selling hay equipment, Boylan says one of the most important things he’s done for the ranch is learning to work with nature.

“I think in 2012 I realized the importance of resting and changing our pastures,” he recalls. “I realized how early we could return to these pastures the following year when we got water nearby, and it dawned on me; that was what nature needed. Weed has to go through a full cycle.”

Profitability came after a year or two, Boylan says. But other than that, these practices are the best for the grassland and while expensive up front, it pays off in the long run.

He talks about future ideas and even more improvements by introducing herbs that grow in different seasons. He doesn’t want to take away from the native grass, but is interested in intercropping to increase grazing capacity.

“For me, it’s all about the weed,” he says. “If you take care of your weed and your ranch, you have to do that to stay in this business. Some days it’s hard to stay afloat, but we’re living the dream!”