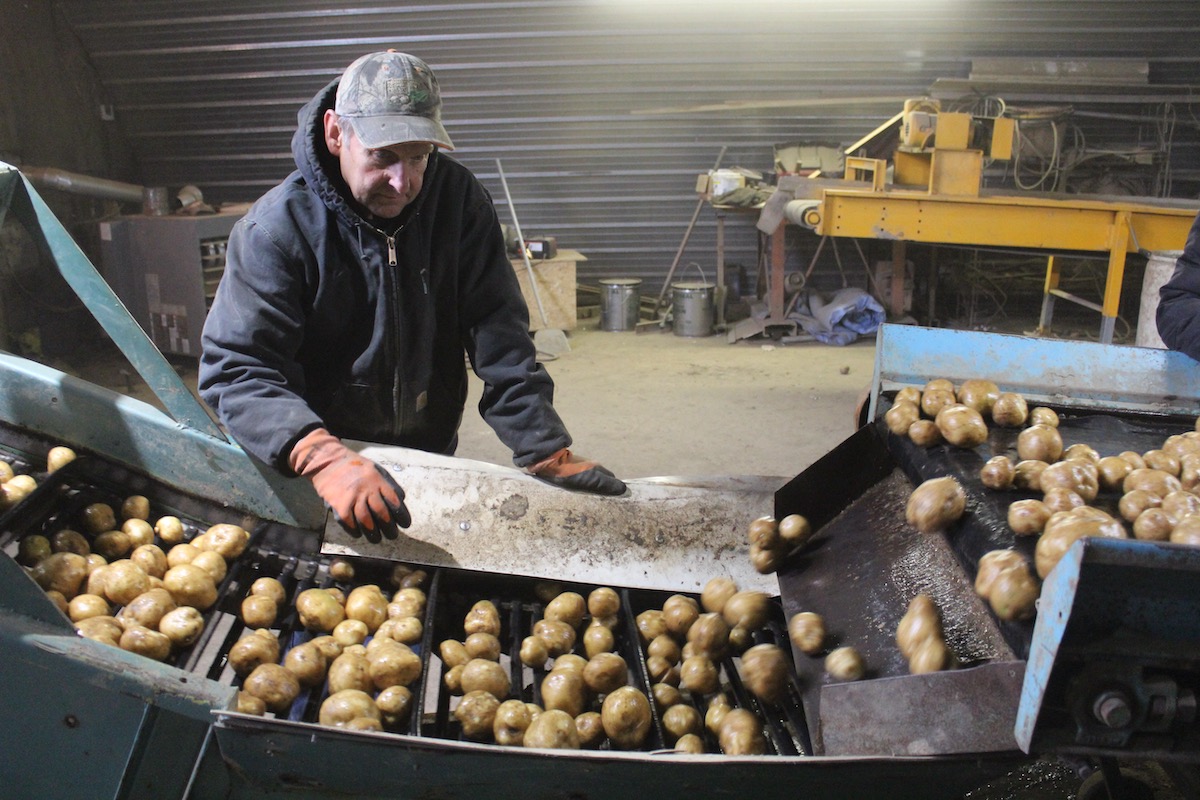 CAMBRIDGE SPRINGS, Pa. – Potatoes roll down the sorting line in one of Troyer Land Resources’ storage barns in northwestern Pennsylvania on a November afternoon. These freshly cleaned potatoes are turned into potato chips at Herr’s, one of the snack food companies that made Pennsylvania famous as the snack food capital of the United States

Kevin Troyer stands at the end of the line and takes one last look at the potatoes before they are loaded onto a trailer. It’s a scene he’s intimately familiar with.

“I have a picture in my phone of me standing at the inspection line with my father when I was 4 years old,” he said.

The Troyer family is part of the Pennsylvania Cooperative Potato Growers, which is celebrating its centenary this year. Secretary of Agriculture Russell Redding joined owners, processors and others to recognize the achievement on November 1 at Bender Potato Farm in Orrstown, Franklin County.

“Pennsylvania and potatoes go hand in hand,” Redding said at the event. “What would a Pennsylvania county fair be without french fries, or the ‘snack capital of the USA’ without potato chips, or Thanksgiving without a pile of buttered mashed potatoes?”

The cooperative was founded on June 13, 1922 with 22 members and grew out of an association of potato growers. Nathan Tallman, president of the co-op, said forming a co-op gave them protection under the Capper-Volstead Act and gave the group a chance to discuss pricing and collaborate on marketing.

In 1949, during the industry’s heyday, the cooperative built the Potato City Hotel in Coudersport, Pennsylvania as a hotel and restaurant that served as a banquet center and meeting place for the potato industry and as a vacation spot for farming families, according to Big Man. The hotel closed in 2019.

There was also an experimental farm there, run by Ernest Nixon, uncle of President Richard Nixon. Because of this family connection, Nixon, then a California Senator, spoke at the Pennsylvania Cooperative Potato Growers’ annual banquet in 1952. That same year, the co-op served its millionth baked potato to a customer at the Pennsylvania Farm Show.

The Co-op’s food stand at the Farm Show continues to draw visitors, serving up thousands of potato fritters, 12 tons of freshly cut fries and six tons of baked potatoes.

Pennsylvania has never been one of the nation’s largest potato producers, but it is one of the top states for snack food manufacturing operations, with 24 potato chip factories in the state.

The cooperative handles marketing and logistics for its members, which includes selling potatoes to many of these snack food manufacturers. There are 28 Pennsylvania growers in the cooperative who produce more than 83,000 tons of potatoes each year. There are also a number of associate members from other states who help close contracts for potatoes year-round, Tallman said.

“They should be fried, salted and seasoned,” he said.

The season starts in February or March when they buy certified seed potatoes, said Troyer of Troyer Land Resources in Waterford, Pennsylvania. He is a third generation breeder.

They’ll start planting in mid to late April, with a goal to be ready by the end of May, Troyer said. The harvest begins in September. Chipping potatoes need to be harvested early, before the ground could freeze or the composition of the potatoes could change, Troyer said. Tallman said most Pennsylvania growers want to be ready to harvest by Halloween.

“If you fry the potatoes, fry out the water and replace it with oil,” Troyer said. “When you have more solids, it takes less heat and oil to cook the fries. And it makes a healthier chip because you’re using less oil.”

Most of what Troyer grows now is potato chips, but he also grows a few varieties for food supply. Growing potatoes is a capital and land intensive operation. All parts of the process, from planting to harvesting, involve many specialized machines, as well as buildings needed to store potatoes until they are ready for shipment.

Troyer said he can store potatoes until the start of the next growing season, but demand for potato chips typically spikes during the holiday and soccer seasons.

Its fields are in a four-year rotation with corn and soybeans. He has found that the longer he can rotate a field of potatoes, the better his potatoes will grow when he plants them again.

“Once you’re set up, it’s quite lucrative,” he said. “You can make more money with fewer hectares than with grain.”

Latest farming news in your inbox!