The New York Rangers were less than a minute into the game and looked like they were skating in the slush. Before the first half was over, they found themselves in a 2-0 hole en route to busy Los Angeles.

That all changed when they came out of the dressing room for the second time as they charged back to take the lead and eventually win.

“I thought we were slow for the first ten[minutes],” Gerard Gallant said on the team’s YouTube channel. “We played well after that, being more competitive on the puck and sticking to our game. Obviously that first goal was hugely important for us to get back into the game of hockey.”

The Kings scored on their first shot just 35 seconds later as Kevin Fiala owned the slot area in front of Igor Shesterkin. He overcame Jacob Trouba to set an ominous tone to start the game.

Less than six minutes later, a slash from Vincent Trocheck put Los Angeles on the power play. Once again, Fiala made a big play by finding Gabriel Vilardi for a detour off the side of the net, sneaking up on Shesterkin’s right pad for a 2-0 advantage.

When the first period was over, the Kings overtook the Blueshirts by a 13-6 margin and looked like they could run away with this contest.

Rangers began to settle down towards the end of the opening period and played purposefully in the middle verse.

First it was Braden Schneider, just 2:22 up when he made a hard point shot that Kings goaltender Cal Petersen couldn’t pick up. Filip Chytil and Alexis Lafreniere registered the assists in the list.

Barely ten minutes later, Trocheck equalized his penalty when he worked his way through the Kings defense and then benefited from some luck with the puck.

As he snaked to the top of the net to take a shot, Drew Doughty’s racquet threw the puck into the air over Petersen’s shoulder to level the game. Adam Fox would register the assist to extend his scoring streak to nine games while his partner Ryan Lindgren got the other assist.

Rangers would go into the lead by just 76 seconds on a late penalty shootout.

Kaapo Kakko parked in front of the net to pin a loose puck home. The other two members of the Kid Line collected their second assists of the game on the list. It was Kakko’s fourth of the season and first in six games.

“We found a way to win the game,” Kakko said afterwards. “The first ten minutes were not good at all. Then we started playing our own game and we can do that.”

Things got precarious as the Kings pushed hard to tie it, and they eventually did.

Sean Walker scored his first goal of the season, leveling the score by just 6-12 in the final frame.

It took a full 54 seconds for two key Rangers to restore the lead after a set piece play. Mika Zibanejad noticed Chris Kreider running down the left flank. He fired a deep puck that only his fast winger could reach, and Kreider hit him once off the end boards for the game-winner. Fox recorded his second assist of the night on the play.

“It’s something he mentioned a little earlier when you come down the strong side that sometimes there’s space on the short whistle, so I just tried to put it there and there was space on the short side,” Kreider said via NHL.com. “Well, good coaching from Mika and a good game from Mika.”

Krieder scored the insurance marker after a disinterested play by Jimmy Vesey into the empty net, with K’Andre Miller registering the final assist of the night. 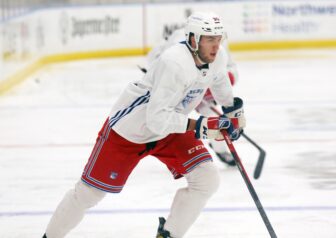