Over the past decade and a half, Hunters Helping the Hungry has delivered 2.2 million servings of fresh, quarter-pound venison to families.

The hunt begins in the dark. Les Giese and his son Thor make their way through a public forest in Annandale, New Jersey, to a stand of trees where they wait for dawn and, if they’re lucky, a deer. We make ourselves comfortable 25 feet off the ground and watch the sun rise through the trees.

SAM EATON OF NEWSY: So what’s the secret? You just. It’s a matter of waiting?

After about four hours and no deer, we call it a day. On the trail we meet up again with Thor’s father Les, who also got nothing.

“They either run through the woods like a freight train or they’re like a ninja, you know,” said Thor Giese.

Les Giese and his son do not hunt deer for themselves. They’ve already stocked their freezer with enough venison for the year. Every deer they get from now on will feed families in need instead. It’s a program run by the New Jersey Chapter of Hunters Helping the Hungry, and Giese is the President.

In the two-and-a-half decades since he founded the nonprofit with friends, Giese says it’s become one of the top three game meat donation programs in the country. But he says it’s not just about feeding the hungry. It’s also about saving these forests.

“A forest, a healthy forest like the one you see behind me here, can handle 15 deer per square mile. This particular forest probably has close to 150 deer, 10 times the carrying capacity of this forest,” said Les Giese.

And with one in 10 US households struggling to support their families, Giese says hunting down more deer as a source of lean, healthy protein is a no-brainer. It has also become a lifeline for food banks in New Jersey.

The problem of deer overpopulation in the backwoods of states like New Jersey is getting worse, but so is hunger. And it is in places like this that the solutions to both of these crises come together.

Shannon Williams is the interim director of Norwescap Food Bank in Phillipsburg, New Jersey. She says the warehouse we visited distributes two million pounds of food a year to food banks, soup kitchens and homeless shelters across the state. 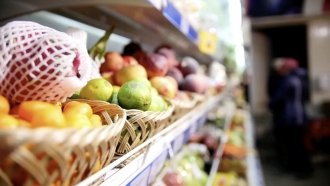 “This is the Norwescap Food Bank. This is our warehouse,” Williams said. “And this is part of the venison that we have received from the processors and from hunters who are helping the hungry and that we are distributing to our agencies.”

Williams says the venison is in high demand, especially as the cost of supplying meat to families has skyrocketed.

“With the pandemic and now with food inflation and the cost of everything going up, it’s been very difficult and the need has just kept increasing. And we’re doing our best to keep groceries in and out as quickly as we can,” she continued.

From the Rockies to New England and the Deep South, white-tailed deer populations have exploded in recent decades. After being decimated by hunters in the 1930s, the deer has made an amazing recovery, multiplying by a thousand in less than a hundred years.

But the process has endangered the same ecosystems that sustained their recovery.

Jay Kelly is a biologist at Raritan Valley Community College. He says more deer squeezing into smaller and more fragmented forests is sending the entire ecosystem into freefall.

“So this is a typical forest in central New Jersey. What you see here can be found pretty much anywhere in the region. And what is remarkable is the absence of any living beings in the undergrowth.”

“[At} about 15 [deer] per square mile regeneration begins to decrease. The waist-high seedlings will start to disappear. And above 20 per square mile everything in the forest starts to shut down with the loss of bird populations, all components of vegetative understory, arthropods, amphibian density and so on,” Kelly said.

In New Jersey, deer densities typically exceed one hundred per square mile, creating what Kelly calls a zombie forest. Not only is biodiversity lost, the only thing that replaces the mature trees when they die are invasive species like this Japanese angelica tree.

“The canopy will come out of these angelica trees, which are these enormous compound leaves that have thorns on the stems of the leaf thorns and the leaflets and leaflets themselves. It’s simply armed with all manner of defenses on every inch of the tree. It’s really incredible,” Kelly said.

The good news is that once deer populations are reduced, the forest will recover.

Duke Farms Nature Preserve in Hillsborough, New Jersey is a clear example of how quickly this change can happen.

“So what you’re seeing here is about 15 to 17 years of regeneration since the deer at the site were initially aggressively managed,” Kelly said

Kelly says deer density here has reached 250 per square mile. After installing deer fences and maintaining deer populations at much lower densities, the invasive species disappeared and the forest regenerated.

“The trees you see growing are ash trees. There are hickories and oaks all growing in this undergrowth,” Kelly said.

Kelly says that aside from reintroducing predators like wolves into these forests, hunting is the most effective means of reducing deer populations. But the number of hunters in the US has steadily declined since its peak in the 1980s.

And to process the meat for food banks, you need USDA-certified butchers like JB Person’s family-run Game Butchers in Lebanon, New Jersey.

Person says his father started the business in the 1960s. 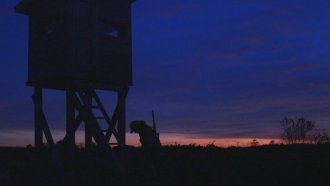 With grants now covering the cost of slaughtering food banks, Person hopes more butchers will come online to expand the program. In the meantime, he’s struggling to keep up.

“And it doesn’t take long. I mean, they come, they pick up the meat – it’s just been in their freezers for maybe a week or two. And it’s being distributed and it’s gone,” Person said.

“We’re seeing somewhere between 50 and 70 customers, which means pretty much since COVID. And now, at the height of financial inflation and everything else, we can see one person every three minutes on average,” Gorman said.

Cars queue to load pre-ordered groceries. This is what the food insecurity crisis in America looks like. Bob Flanagan is one of them.

“I’m self-employed, I’m a contractor. The bottom fell out after I got COVID because I can’t work. I couldn’t work,” Flanagan said.

Flanagan also used to hunt. But since COVID destroyed his lungs and forced him to carry an oxygen tank with him at all times, he has had to rely on the donations.

“There’s the venison. That’s a hamburger. I mix it with the tomato sauce and make spaghetti,” Flanagan said.

Rarely does one crisis help resolve another. But Les Giese hopes the partnership he has created between the state, the hunters, the butchers and the food banks offers a glimmer of hope.

That evening, Giese, his family, and friends gather to grill venison on their backs and share a meal.

He says he grew up on a dairy farm in Illinois, where sharing with neighbors was a way of life. And as the forests suffer and more of his neighbors struggle to support their families, Giese hopes the spirit of sharing will prevail.