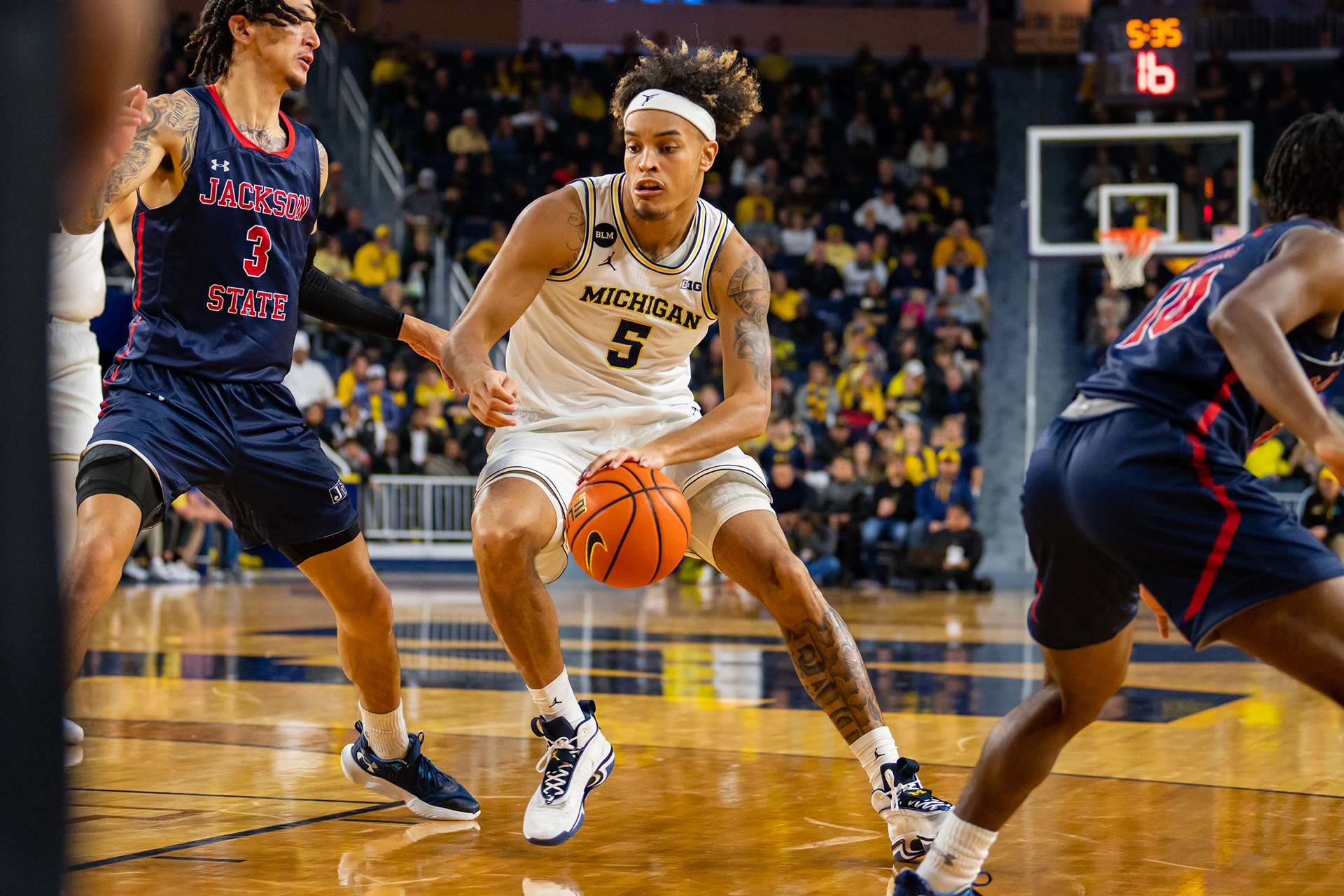 It took a while — and some would say a little too long — for the Michigan men’s basketball team to establish any sort of dominance over winless Jackson State. The Wolverines’ terrors of a near-excitement by Ohio, another mid-major, their final time out, rang through much of the first half.

“It’s still early in the season,” Michigan coach Juwan Howard said. “I’m sure a lot of teams like us aren’t playing their best basketball and we’re getting better and better game by game.”

The Wolverines certainly didn’t play their best basketball Wednesday, especially early on. In the beginning they built a wall – just not a defensive wall. Michigan attempted three-pointer after three-pointer from around the arc. Regardless of the location, the Wolverines fully embraced long-range shooting, and it was unsuccessful. They opened 1-6 from deep with six of their first seven shots being threes.

“Offensively, I know these guys are great shooters,” confirmed freshman Jett Howard after the game. “It won’t fall every night. And you don’t want to destroy our confidence either, so still take the open shot.”

Literally from the opening tip, when a tiger tried to chase down the lost tip in the Wolverines’ backcourt, Jackson State was scrappy. Though it also opened cold from the field, the Tigers stayed on with high-intensity play, creating extra possession and disrupting Michigan’s offense when it looked for baskets outside the three-point line.

With timed buckets and a barrage of Wolverine misses, Jackson State kept Michigan on alert throughout the first 15 minutes. Whether it was an alley-oop dunk in Wing Trace Young’s transition or simply not backing down in front of larger defenders, the Tigers had Crisler Center on edge.

The Wolverines eventually stabbed and kept Jackson State scoreless in the last four minutes of the first half. At the other end of the floor, their offensive finally found a rhythm. At the start of that stretch, Jett was scheduled to shoot free throws, but Juwan yelled at his five starters on the floor – including Jett – to speak to him first. Michigan was hot after that, finishing the half on a 9-0 run capped by a difficult three-step from Jett in the corner to go 37-27 and build a lead it wouldn’t give up.

Graduate guard Jaelin Llewellyn said Juwan’s message at that court meeting was aimed at playing harder, particularly on defence. Jett, sitting next to Llewellyn after the game, offered more nuance.

“(Llewellyn) just translated the clean part,” Jett said with a smile. “I (will not) say exactly what (Juwan) said.”

Whatever Juwan’s message was, it came at an opportune time. The Wolverines stayed comfortably in the driver’s seat as the game went on, making sure to shake off their slow start completely. The Tigers’ passes, which were crisp early on, were intercepted or sailed out of play as the half progressed.

Meanwhile, Michigan’s three-hands began falling with some consistency. Back-to-back threes from graduate guard Joey Baker — immediately followed by a three from Jett, who high-fived Juwan on his way down the court — highlighted the Wolverines’ 50% shots from deep in the second half who kept Jackson State out of reach.

And suddenly, the once-enraged tigers looked unrecognizable — and so did the once-limping Michigan, as it looked more collected.

“At the end of the day, we’re just trying to get into the rhythm, both offensively and defensively,” Jett said. “Hopefully we’ll be better by January, but we’re working hard.”

January may seem a long way away, but winter is coming – and the Wolverines’ schedule is quickly tightening.

For Michigan to have long-term success, it must avoid the kind of slow starts it shrugged off to get the job done against an underperforming team.