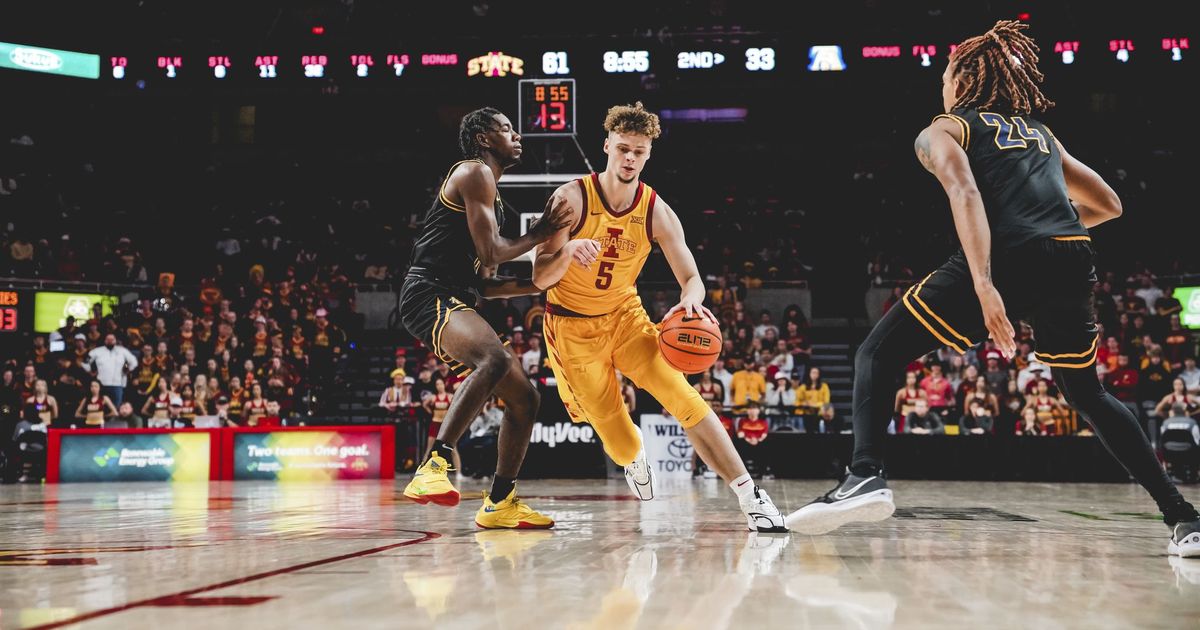 PORTLAND — Six days into his tenure as Iowa State’s new coach, TJ Otzelberger brought forward a defensive-minded transfer that he believed could affect the win for a program that hadn’t done much of the same the year before.

Likewise, Jaz Kunc was eager for his own wins.

Iowa State was coming off a two-win season in 2020-21 and Kunc, motivated by something Washington State coach Kyle Smith told the Cougars while the Slovenia forward was still in Pullman, wanted after his participation in the NCAA tournament attendance 41 victories over three seasons on the Palouse.

“The Washington State coach said, ‘If you don’t make it to the NCAA in your college career, you haven’t done anything,'” recalled Kunc. “I think those were exactly his words.”

Kunc endured three tough seasons at WSU, but he’s seen the other side of the varsity basketball spectrum since moving to Ames, Iowa and playing in all 35 games for an Iowa State team last season advanced to the NCAA Tournament Sweet 16 before losing to Miami.

The WSU transfer started 10 games for Otzelberger, including two in the Big Dance, and had career-highs in minutes (22.4), defensive rebounds (3.1), assists (1.0), blocks (0.6), and Steals (0.8). Kunc was happy to tick an item off the college basketball bucket list, but he’s already working on the next.

“Obviously it’s been a fun year,” he said. “But that’s in the past now. There are many good memories and we are striving to make another one this year.”

It’s probably too early to tell if the 2022-23 Cyclones are tournament-ready, but they’re wasting no time making new memories. One of them will no doubt be Thursday’s 81-79 overtime win over Villanova in the first round of the Phil Knight Invitational. Iowa State built a 16-point cushion five minutes into the second half, watched the Wildcats recover to force overtime and reacted in the extra frame to carve out a two-point win.

“I have a feeling we’re going to do that. We play with energy, we play for each other,” Kunc said. “We’re 16 up, we’re 16 down, we never give up and we just keep playing our game, keep playing our rhythm. The game plan, we executed it really well, attributing it to our big boys in the post and just a lot of grit. We ended up throwing it out.”

Kunc embodied Iowa State’s toughness early in the second half, pinching his elbow on a defensive play and holding it with his other hand while jogging to the offensive end of the floor. The ball eventually found the striker, who caught and drilled a wing 3 pointer, extending the ISU lead to 39-34.

Kunc finished with just six points on 2 of 6 shots, but the former Coug grabbed six team-high rebounds, had two steals, two assists and finished the game with a plus-8. Kunc started all four games for undefeated Iowa State and hit a double-double with 17 points and 10 rebounds in the Cyclones’ 80-43 win over North Carolina A&T.

“He’s a big player when it comes to influencing victory. He takes great shots, he blocks every possession, he moves the basketball great, he’s an incredible defender,” Otzelberger said of Kunc. “He knows what’s coming and how to defend it. He takes responsibility and gives up his body for the team. The main things he does that we expect him to do that don’t show up on the stat sheet. It’s really cool to see all the amazing things, the things he can do to help us win games and it was certainly something to see.”

When he arrived at Pullman prior to 2018-19, Kunc was wafer thin, weighing a whopping 185 pounds at 6ft 8. In five years at WSU and ISU, he’s added about 40 pounds to his physique and is now on the list at 222 pounds Cyclones listed

“It’s the best conference in the nation and a lot more physical than the Pac-12,” he said. “Obviously the talent in the Pac was exceptional. In all the years I’ve been there, the Pac-12 have put five, six people into the league, but I have a feeling that in the Big 12 they’re just experienced players. They come in, a lot of transfers, they play hard, they play with courage. … Every game in the Big 12 is a war. Nothing is given and everything is earned.”

Otzelberger, who coached as South Dakota State and UNLV before arriving at ISU, has demanded a level of discipline from players that has allowed Kunc to develop in a short, successful tenure with the Cyclones.

Kunc is still keeping up with Smith and the Cougars — “shout out TJ Bamba,” he quipped — but is struggling to stay up late enough to catch most West Coast games. He and Iowa State guard Caleb Grill, a UNLV transfer, already have a friendly bet on a Dec. 10 game between the Cougars and Rebels.

“Hopefully they can get me a dub,” Kunc said.

There were two near misses on the first day of the Phil Knight tournament. Former Eastern Washington coach Shantay Legans was part of the first, nearly leading Portland past high-ranking North Carolina at the Moda Center.

The Pilots, with ex-Eagles Tyler Robertson and Jack Perry on the grid, led 13 minutes, 49 seconds and led with 4:32 minutes remaining before the Tar Heels closed on a 16-6 run. Portland made just one jumper within the final 4:32 — a Robertson 3-pointer — and ran 1 of 8 during that stretch.

“I liked the way our guys lined up and fought,” said Legans. “There was a four or five minute stretch where we didn’t score so I didn’t like that that much but I liked the way they fought and played hard and how we did the right things at the right moments We just didn’t get any rebounds there in the second half.

“It showed that we can play with almost anyone in the country and you hang your hat on that.”

Robertson, an All-West Coast Conference pick recruited by Legans after Cheney, scored 13 points for the Pilots on 4 of 12 shots and had seven assists. Ex-EWU guard Jack Perry had six assists, five points, four rebounds and two steals in the game. Another former Eag, Mike Meadows, did not play for Portland because of a hamstring injury that sidelined him three games.

The Pilots won 22 combined games in the three seasons prior to Legan’s arrival, but posted a 19-15 record last season and were predicted by WCC coaches to finish fifth in the conference this year.

“We came in last year wanting to focus on just competing and changing the culture of University of Portland basketball,” Robertson said. “We did that and people gave us a pat on the back, but we’ll never settle for sixth at our conference.”

Oregon State, coached by Ferris High School graduate Wayne Tinkle, almost created a stir of its own, leading 18 minutes and 36 seconds against No. 8 Duke before losing 54-51 at the Veterans Memorial Coliseum.

The Beavers were up 45-42 with less than nine minutes to go, but Duke standout rookie Kyle Filipowski knocked down a 3-pointer and guard Jeremy Roach hit a jumper to give the Blue Devils an lead who didn’t want to give up.

Tinkle’s Beavers closed the gap to a point on several occasions, including going 52-51 with 16 seconds remaining, but Duke made two free throws and Jordan Pope missed a potential 3-pointer on the final buzzer.