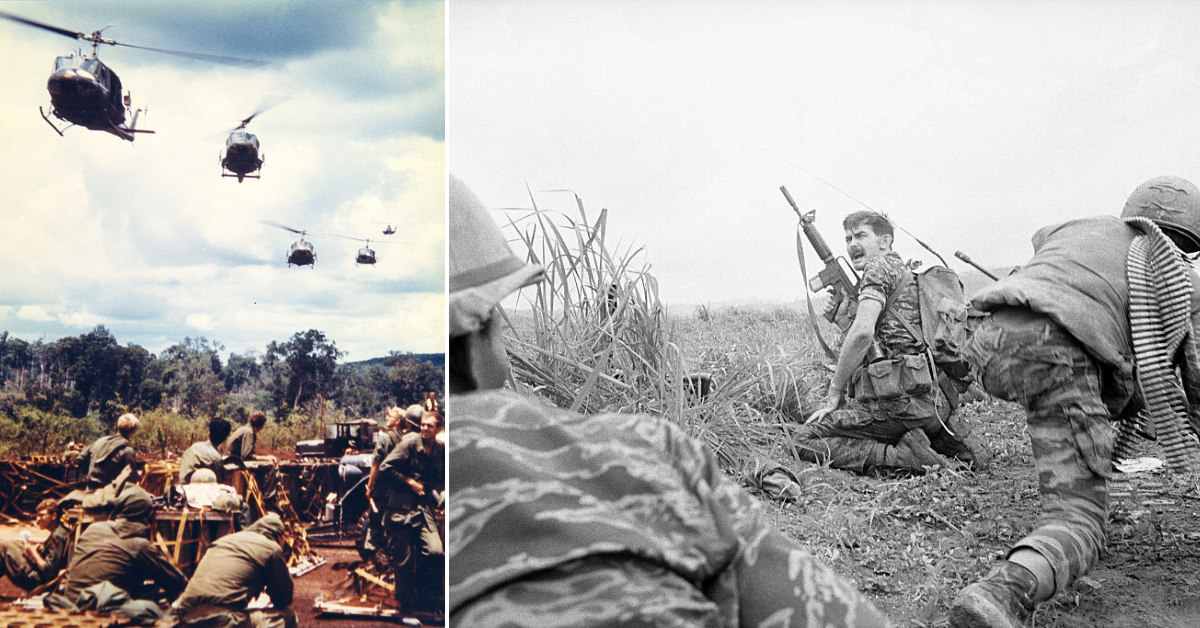 Thanksgiving, a time to fill up on turkey, stuffing, and potatoes in a variety of shapes — unless you’re MACV-SOG. Then it’s time for a team of six commandos to locate 30,000 enemy troops in the Vietnamese jungle. This is exactly how this elite group spent Thanksgiving in 1968.

MACV-SOG, full name Military Assistance Command, Vietnam – Studies and Observations Group, was a top secret American force created in 1964. It was made up of elite volunteer troops from all branches of the US military, including Green Berets, Navy SEALs, CIA operatives, specially trained Marines and Air Force commandos, and local fighters.

The work MACV-SOG undertook in Laos, Cambodia, Thailand, and North Vietnam remained classified because the US government’s official position was that American troops were not fighting outside of South Vietnam, a fact they wished to keep secret. To ensure this, members were stripped of any objects, clothing, or markings that would identify them as Americans.

The vast majority of missions conducted by MACV-SOG were for reconnaissance purposes, generally along or near the Ho Chi Minh Trail, which stretched southward from North Vietnam, passing through Cambodia and Laos along the way.

John Stryker “Tilt” Meyer was one of the fearless men who volunteered to be an agent with MACV-SOG. He first enlisted in the US Army in 1966 and shortly thereafter was accepted into the Airborne School, where he received airborne certification.

He was also one of the MACV SOG commandos involved in the 1968 Thanksgiving Day mission and served as reconnaissance leader for a team of six. Aside from Meyer, ST Idaho consisted of four local mercenaries – Sau, Hiep, Phuoc and Tuan – plus fellow American John “Bubba” Shore.

By November 1968, US intelligence was extremely concerned about any movements by the North Vietnamese Army (NVA) undertaken after the Tet Offensive. Launched last January, the NVA and Viet Cong orchestrated a series of surprise attacks on urban centers with two main objectives: to incite rebellion among the South Vietnamese population and to force the US to scale back its efforts in the country.

In the months following the Tet Offensive, three NVA divisions had disappeared and someone had to find out where they had gone. Insert ST Idaho. The 1st, 3rd, and 7th NVA Divisions numbered about 30,000 soldiers and were part of a 100,000-strong force the Americans were keeping an eye on. Disappearing at the Cambodian border, they anxiously prepared to attack Saigon.

The task was simple enough: ST Idaho would invade Cambodia and locate the missing troops, after which they would relay the information to HQ.

On Thanksgiving Day 1968, Meyer and his men waited at the Bù Đốp Special Forces camp, where the MACV-SOG team was delivered a Thanksgiving feast of turkey, gravy, mashed potatoes, and cranberry buns. A helicopter then arrives to take the men to Cambodia. This presented its own challenges, as they were only allowed to fly 10 kilometers into the country and had to walk the remaining two kilometers.

ST Idaho quickly disembarked the Huey and began her mission to search the dense jungle for the missing NVA troops. It wasn’t long before they noticed smoke, which they confirmed was from the wanted soldiers. The camp seemed empty, the MACV-SOG commandos started taking photos and searching for important documents.

It seemed like they had successfully completed their mission – and pretty quickly. Unbeknownst to them, however, they had just walked into the middle of an NVA camp with 30,000 men.

It was Sau who alerted Meyer to the real danger they were in, saying gravely, “Beaucoup VC! Beaucoup VC!” After serving with MACV-SOG for just five months compared to Sau’s three years, Meyer trusted the man’s instincts.

It wasn’t long before North Vietnamese troops approached from both sides before opening fire. The MACV-SOG team planted a claymore mine and ran toward it. The enemy followed close behind, but ST Idaho fired back, lobbed grenades and set up tripwire claymores wherever possible.

The team’s rescue came in the form of US Air Force Bell UH-1P Hueys operated by the 20th Special Operations Squadron. The helicopters opened fire on the advancing enemy soldiers with M60 machine guns and M134 miniguns. The helicopter made it to the rendezvous point, and the six men dove down as fast as they could, setting up one last claymore on the edge of the landing zone.

Getting out of the Thanksgiving Day mission alive

Meyer later described the maniacal onslaught in his book, writing: “We were moments from a very violent death, and we killed untold numbers of NVA soldiers – soldiers who continue to earn our undying respect.” I took no pleasure in killing the enemy. It was just us or them.” They made it, however, as the Huey took off before NVA troops could reach them.

More from us: David Larsen took on 50 enemy troops with just one M60 machine gun

Successful in their mission, if a little worse for the merchandise, the first thing ST Idaho did upon returning to base was a visit to the cafeteria for a well-deserved second Thanksgiving dinner. Shortly thereafter, they were tracked down by the MACV-SOG officer who had sent them on the mission and asked if they would accompany him to another Thanksgiving feast and discuss the mission. Meyer and Shore complied and informed him of the well-deserved meal.